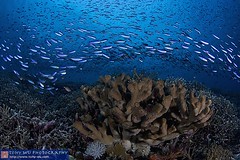 The Eastern Fields is a submerged atoll that lies about half-way between PNG and Cairns. Though some areas of the atoll approach the surface at extremely low tides, for all practical purposes, the area is entirely submerged, plunging down to a couple thousand metres.

The fact that the atoll structures are virtually invisible, coupled with rough weather for about 10 months of the year, mean that most sane boat captains do their best to avoid this area. It's uncharted and no doubt quite dangerous when the wind and sea gods act up.

There's only one person I know who's crazy enough to have gone against conventional wisdom and spent the past 13 years or more visiting this area, exploring bommie-by-bommie, passage-by-passage. He's probably the only person on the planet who can navigate the Eastern Fields, and more importantly, he's the only one who knows where all the big fish hang out. 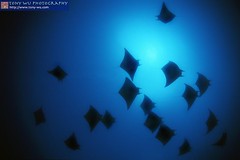 Craig Dewit, captain of the MV Golden Dawn, has been exploring the area for well over a decade, and taking perhaps up to 50 divers a year out there (probably fewer). What this means is that very few people have dived the Eastern Fields, and those who have, keep going back. I've been twice, and I'll be going back again in January 2008.

I've filmed a TV documentary out here, and captured some of the most amazing scenes I've ever witnessed. Sharks abound. Fish swarm by the gazillions. Coral completely covers every square centimetre of the atoll system. There are no fisherman (they prefer easier places to plunder), and there are no other boats visiting (everyone else is saner). So a visit to the Eastern Fields with Craig means you get the entire, unspoiled ocean to yourself.

I'll be running a photo workshop on Golden Dawn from 2-12 January 2008. That's 10 days of concentrated diving and photography, with workshop-style discussions in the evening to cover everything from setting up your gear to photo processing. The emphasis, of course, will be on digital equipment and photo techniques.

From 14-30 January, we'll head back out to the Eastern Fields again. On this longer trip, there won't be any organised workshop per se, but I'll be more than happy to help anyone on board who has questions.

If you like sharks, you'll love these trips. The photo of the whitetip reef shark in the header graphic of my blog is from one of the places we'll visit, where I had dozens bumping my dome part. I've counted over 40 sharks at another site, been mere centimetres away from huge silvertips, swam in the open ocean with majestic hammerheads, and been completely surrounded by grey reefs and whitetips on the reef. I've also filmed silvertips being cleaned, and Craig has discovered a place where threshers gather, perhaps to be cleaned. The macro life is amazing too. I've photographed everything from incredibly fat nudibranchs to squat lobsters carrying eggs (!). But with swarming silvertips around, it's a bit difficult sometimes to concentrate on the tiny stuff.

Of course, given the remote location, open seas and large animals, this trip is for highly experienced divers only. It's best if you've had a few hundred dives under your belt, experience on a liveaboard before, and no problems dealing with fast currents. Golden Dawn is equipped to handle mixed gases and rebreathers, so be sure to let Craig know if that's something you want to take advantage of.

As if the incredible diving weren't enough, the boat is one of the best dive vessels in the world. It's well-equipped, the crew are fabulous, and Steven — the cook — makes the best damn brownies I've ever had!

See the Golden Dawn website for more information on the boat, and email Craig to book a spot. See you in the Eastern Fields!

A few photos from the Eastern Fields here.